Whatever you do, don’t hate them back. 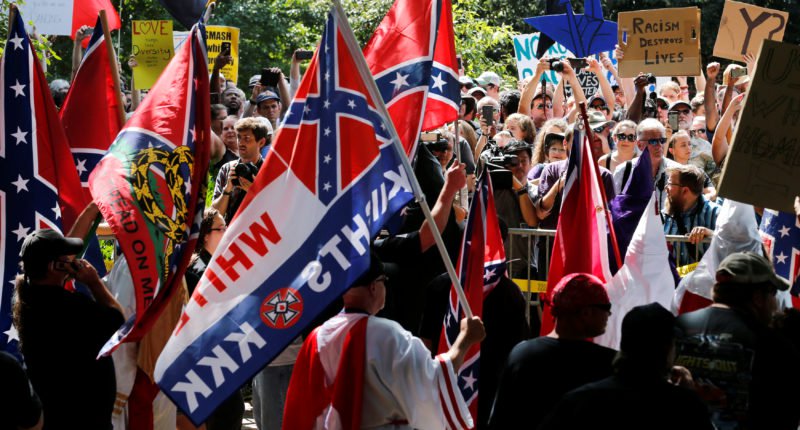 You can’t hate, hate.  Really, you defeat your purpose.

And let’s be honest with ourselves, it isn’t just the guys in Charlottesville, it is all around us.  I am dumbfounded, daily, by the hate spewed on the news and social media.  The name calling, the trolls, the attacks on “the other side.”  Let me share what my own conservative family member said when I told her that I tended towards a more liberal mind.  She said “well that disappoints me.”

Fucking seriously?  You have known me my entire life!  You know what is in my heart.  You know the type of person I am, yet you allow your hateful brainwashed definition of “liberal” define me, instead of saying to yourself “well, maybe I need to rethink this liberal thing.”

In that moment, I felt like her identity politics and chosen beliefs meant more to her than her love for me.  You know why I don’t hate conservatives or tolerate hate towards them?  Because many are my friends and family, and I LOVE them, and know they are good people.

I have never seen so many people willing to stick up for a political figure they don’t even know!  Men or women who have never actually done anything for them.  Yet they are willing to throw their friends, family and neighbors under the bus all because of identity politics.

I have never seen so many people who choose to watch/read toxic, drama creating idiots on the news or talk shows who provide no education about real issues.  Instead they spew vitriol about black people, brown people, Muslims, Migrants, and blame, blame, blame.  As if it is really THAT simple.  As if we are not ALL God’s children.  As if God made our differences to be feared instead of celebrated.  As if God created this big beautiful world with all types of people, and all types of languages to teach us that we should stick with those that look like us, sound like us, and believe like us.

You really think that is what makes Him happy?  BTW, these politically divisive tactics of marginalizing and discriminating and creating fear of others have been used FOREVER!

It must be great to live a life where it is everyone else’s fault.  It is so comforting knowing that you never need to be the one to change.  God forbid you challenge your mind, beliefs or thinking to help the world become a better place. Speaking of God, do you really think that He created your brain with TRILLIONS of neurons hoping that you would use the same neurons over and over, without ever, literally, expanding your mind or experiences?

I think we should all aspire for great big beautiful minds.  And I have news for you.  Changing yourself is the healthiest, most empowering, and most fulfilling thing you can do for yourself and the world.

It seems America has become a very hateful place.  And it seems many people are hell bent on blaming the other side, instead of taking a good hard look at themselves.

Cowards we are, the whole lot of us.  Nothing changes, until we do.

Let’s define some things shall we?  The definition of liberal is “open to new behavior or opinions and willing to discard traditional values.”  Conservative is defined as “holding to traditional values and cautious about change and innovation, typically in relation to politics and religion.”

Liberal and conservative views are not good or bad, they are merely different ways of seeing the world.  And I believe that they once made for a balanced government.  You see, when everyone actually has the best interest of America at heart, people work together.

The divisiveness comes when selfish moneyed interests are at the heart of our political system.  This has been going on a long time, and it’s our fault for becoming so apathetic and greedy and selfish ourselves.  Our political figures are nothing but an extension of us.  They are our mirror.  And that is the real reason why we protect them, because we are desperate to protect ourselves.

Hate is a cancer that has the ability to spread like wild fire, and we have become brittle hollow embers waiting to be engulfed.

Our weakness as human beings allows hate to penetrate us easily and deeply.  It hurts us, and we want to hurt it back.

But when we hate the haters, hate wins, and we become part of it’s darkness.

What is the best way to conquer hate?

The answer is simple.  But the practice is difficult.

You fight it by recognizing it for what it is.  An emotion rooted in our own personal fears.

Hate is a reaction.  An energy.  An emptiness and a colossal hellish burden on our souls.

But most of all, hate is a choice.

They choose to hate.  And you become one of them, when you choose it too.  You just add another hater to the world, and none of us really want that.

It is darkness.  It is evil, and it’s sole purpose is to draw more people into it’s sticky, insufferable web.

When you come face to face with this darkness it will almost always grab hold of you and literally shake you to your core.  It will do everything it can to entice you.

Beware, hate rarely marches in broad daylight carrying swastika flags.  Most of the time it comes forth more discreetly, in the form of fear.  Fear of things, places and people you don’t know.  Fear of change.  Fear of different belief systems.

Fear of what you find inside yourself.

Your fear is not about the world, it is about what is inside of you. What you choose to think, to believe, to watch, and to focus on.  What you refuse to recognize and heal within your self.

Being emotionally aware of this,  and knowing you have a choice, is your power source.

When I saw those men marching with those flags I felt hate creep up inside of me.  Those angry faces, the violence, honestly they represent everything that is wrong with this world.  They seem arrogant and proud of their hate.  I mean seriously, at least the KKK wore hoods and came out at night- back in those days they had some shame.

No shame in 2017, and that should really make you stop and think about everything, especially yourself.

Their hate IS their suffering, and it would be mine too, if I let it.

But also remember that the one’s carrying Nazi flags WANT to incite you.  They WANT to agitate you. They WANT nothing more than to provoke your hate to prove you are just like them.

Whatever you do, don’t give them that power.