To the haters and supporters alike, THIS is why I marched. 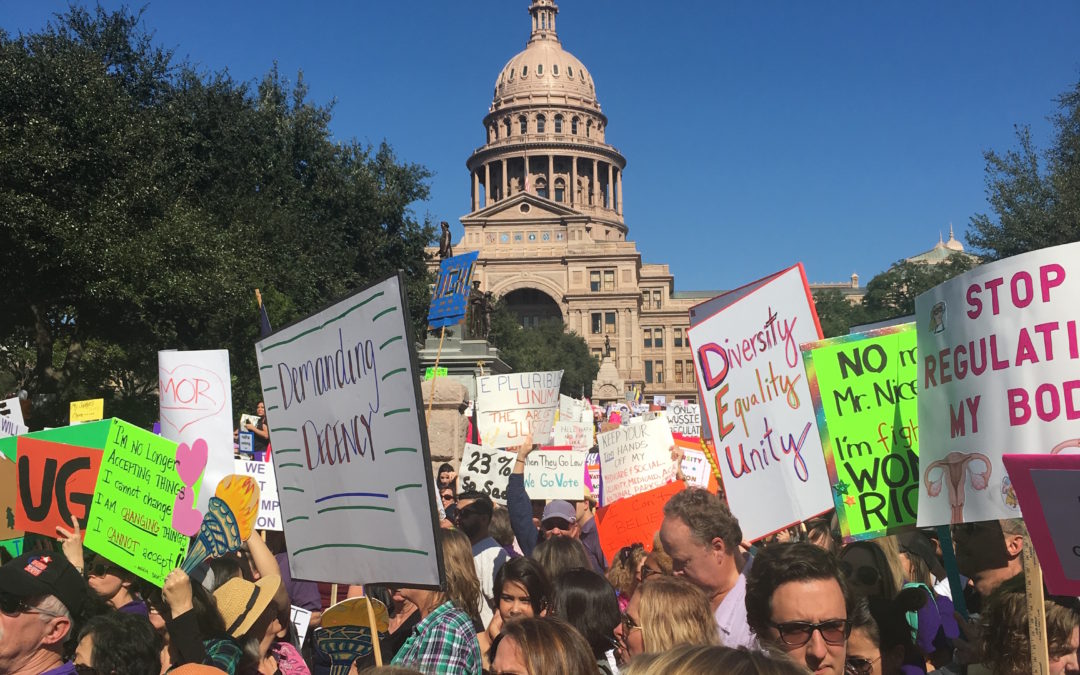 I hate labels because they are merely an excuse for us to judge someone we don’t know anything about.  They are also a political means to divide, support ignorance, and create apathy.

But for the purpose of this blog, I will say that my political views fall into the progressive category.  I don’t call myself a Republican OR a Democrat, because both parties are pretty much corporate puppets.

Ultimately, I will say that I care most about people, peace, and the planet.

I am the daughter, and sister of Christian, Conservative, Republican, Trump supporters.  On top of that, I live in Texas.  I grew up thinking that the word “liberal” needed to be spoken in whispers… “yes, they are nice but they are liberals…”

To say that I feel like the odd man out, would be an understatement.

For most of my adult life, I was ignorant and apathetic of politics in general.  I really did not know enough about issues to stand any ground either way.  I mean, let’s be honest, there is a lot more that goes on in Washington than voting on gay rights and abortion laws.  Our legislation is complicated, our economy requires an advanced degree to understand, and much of what really affects us is not talked about on the news.

I did my civic duty, and I voted.  I cannot tell you how many times, I voted for people whose names I had never even seen before.  I based my decision on the group I identified with, or social issues that I heard about.

At the age of 39, after battling weight and health issues for most of my life, I started doing some digging about food and health in America. What I discovered infuriated me, enlightened me, and liberated me all at once.  I learned more than I can discuss in this blog, let’s just say, I came to understand that fat, unhealthy people made for a strong profits.  Or better said, if we became a country that ate healthy food, and stopped getting sick, we could very well crash the economy.

There is something you learn, when you become a coach.  “How you do one thing, is how you do everything.”  And suddenly I looked at our great country in a very different light.  If we were willing to destroy our own health, and our own environment for the sake of money, what does that say about the other decisions we make?  Are they all for profits too?

I would soon learn, that our prisons are FOR PROFIT.  I would learn that while we refuse social programs that would benefit regular people in America, we socialize the losses of the rich, the banks, and the chemical giants.  Not to mention that our tax dollars go to subsidize GMO’s, a horrifying animal agriculture system, processed foods, and oil and gas.

Mind you, all of which contribute to our ill health, and the destruction of the planet.

I would also learn that since about 1980, when it comes to annual pay increases, for the top 1% wages grew 138%, while wages for the bottom 90% grew only 15%.  Think what you want, but this is not due to the top 1% working harder than the bottom 90%, this is due to the fact that our government, that should be run by the people, and for the people, has been taken over by large corporate interests.

I don’t claim to know everything.  I don’t claim to understand everything, but I am far more aware than I used to be.  I am not okay with profits proceeding everything that really matters in our lives.  I have had to take responsibility for my own ignorance, apathy, and selfishness, in understanding how we got to this point in the United States of America.

I don’t sit here and blame the conservatives or the liberals, Barack Obama, George Bush, Hillary Clinton or even Donald Trump.  If only it was THAT easy, to blame one person.  Truth of the matter is that we all are to blame.  We can point fingers at corruption, greed, and selfishness only after we take a good long look in the mirror.

Truth is, WE all have to step up to fix the problems.  If you are a student of history, then you know that change will never come from the top, and anyone that tells you differently, it lying to you.  Change comes when millions of people stand UP together with common goals for all of humanity.

You see, you don’t just vote, and then go home and do nothing.  You don’t stand for pro-life if you keep blinders up to the 41 million children suffering in food insecure households in our own country, and complain about their lazy, welfare parents using food stamps to feed them.  You don’t demonize the poor, the oppressed or the people that don’t think or look like you. You don’t get angry at people on welfare, and assume they are all taking advantage of the system.  You want to talk about taking advantage of our system???

The fact that so many people willingly believe that THE most oppressed and impoverished people in our country are the ones who have the power to influence our economy, is, INSANITY.

And it’s so convenient.  We can continue to worship money, celebrity and all their beauty and glamour as being the “good ones,” as long as they label themselves like us, while looking down at those that have the least, as being to blame for all that ails us.

I marched because I want to live in a country that has a moral economy.  I want a country that has foresight and wisdom and puts people, peace, and the planet before profits.  I believe that American’s are smart and innovative enough to do things differently.

I marched because I know that social change will never come from the top.

Our forefathers put freedom of the press, freedom of speech, and freedom to protest in the Constitution, KNOWING that the people had to keep our government in line.  Our forefathers were wise, and had foresight, and knew that power could easily be taken away from the people, by the rich and greedy.

If you can honestly look me in the eye and tell me that I have NO reason to question Donald Trump’s character or integrity, not to mention, his mental health, you are in denial or not paying attention.  If you think I should roll over and play dead, then you don’t know history.  If you think the POTUS is above the law, then you do not support democracy.  If you think that he is not showing his tax returns because they are under audit, then you suffer from cognitive dissonance.

If you gave Donald Trump your vote, you owe him nothing.  He works for YOU now.  He works for ME now.  And I marched to let him know that I am paying attention. And yes, I will praise him for doing good things (he crushed the TPP, and I give him credit for that), but I will watch him closely.  After all, he evaded the draft, he filed for bankruptcy numerous time, and he evaded taxes.  And in his words, on National TV, he admitted to this, saying “there were loopholes he took advantage of” and that he proudly stated that he was not corrupt but instead “was a smart business man” for taking advantage of said loop holes.

His tax returns, his refusal to divest from his business interests or put them in blind trusts, are loop holes that he told you with his own mouth that he proudly takes advantage of.  He also knows that he could shoot someone on 5th ave, and his supporters would still follow him.  Frankly, if I voted for him, I would find that terribly insulting.

“When somebody tells you who they are, believe them.”

I have values, and I have ideals and I do not, and will not label myself a Republican, Democrat, Conservative, or Liberal and follow any crowd blindly. I will stand up for issues, and I will hold anyone and everyone accountable no matter what they call themselves.

You see, I believe we all have far more in common than not.  I believe that what is truly important, affects all of humanity.

And I will never allow identity politics to create apathy, and ignorance in me again.